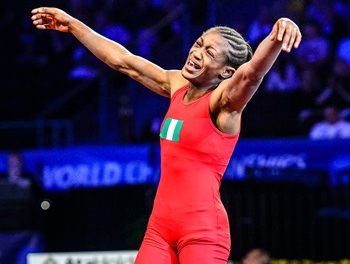 NEW YORK, 2018-Mar-08 — /EPR Network/ — Beat the Streets Wrestling, Inc. and USA Wrestling announced today that three Nigerian women’s wrestlers will compete at this year’s Beat the Streets event at the Seaport District (Pier 17) on Thursday, May 17. They will compete against top U.S. women at 55kg, 57kg and 59kg as part of the annual competition. Competitors for Team USA, which will likely include members of the 2016 Olympic team and 2017 World Championships team as well as other elite stars, and their opponents will be announced in the coming weeks.

Nigeria is considered the strongest women’s wrestling team in Africa. At the 2018 African Championships, Nigeria won nine of the 10 gold medals in women’s wrestling. Nigeria has developed numerous Olympians and World medal contenders in its women’s program. The athletes who will compete at the Beat the Streets Benefit have not yet been selected by the Nigerian Wrestling Federation.

“The addition of the Nigerian women’s team to this year’s Beat the Streets is a landmark moment for the event,” said Beat the Streets Chairman of the Board Mike Novogratz. “We look forward to welcoming them to New York and couldn’t be more pleased that they will be the first wrestlers to represent the continent of Africa in the history of the Beat the Streets Benefit.”

Previous international Beat the Streets opponents have included Russia, Iran, Cuba, Japan, Canada and others. This year will mark the first time that Beat the Streets has held its annual event at the Seaport District/Pier 17.

Top Beat the Streets youth wrestlers will take the mat showcasing their skills in exhibition matches beginning at 3:00 p.m. to kick off the NYC Benefit. For the third straight year, the Benefit will feature the PSAL Girls Freestyle Dual Meet Championships finals, showcasing the two top New York City girl’s freestyle wrestling high school teams from the spring girl’s freestyle season. Then it’s Team USA vs. an international squad at 6:00 p.m. with video highlights and special guest appearances followed by the Beat the Streets Benefit Celebration.

Tickets are required for entry and can be purchased at www.btsny.org or 212.245.6570 or by emailing Kate Linker at klinker@btsny.org.

The Benefit Celebration at Pier 17 will follow the wrestling competition. This unique and electrifying annual event helps Beat the Streets raise significant funds to further its mission. Whether it’s providing a safe, constructive outlet for our urban youth, fighting childhood obesity, empowering women, or uniting entire nations, wrestling teaches persistence, dedication, and the value of working hard to achieve one’s goals and creates opportunities for personal and universal growth. BTS currently serve over 3,000 student-athletes every year.

About Beat the Streets

The mission of Beat the Streets is to develop the full potential of the urban youth and to strengthen the culture of New York City wrestling. BTS works directly with the New York City Department of Education in a public-private partnership to bring the life changing sport of wrestling to over 3,000 New York City student-athletes to help them achieve their personal and athletic goals. Through the operation of wrestling programs in middle and high schools in the five boroughs, BTS and the DOE provide a safe, positive atmosphere in which disadvantaged and at-risk youth can learn the essential life lessons of grit, personal responsibility and teamwork, physical fitness and nutrition, and life-long learning. The goal of fostering strong, well-rounded student-athletes is delivered through coaching, after-school programs, life skills workshops, and summer camps. More information can be found at www.btsny.org.

USA Wrestling is the National Governing Body for the Sport of Wrestling in the United States and, as such, is its representative to the United States Olympic Committee and United World Wrestling, the international wrestling federation. Simply, USA Wrestling is the central organization that coordinates amateur wrestling programs in the nation and works to create interest and participation in these programs. It has over 220,000 members across the nation, boys and girls, men and women of all ages, representing all levels of the sport. Its president is Bruce Baumgartner, and its Executive Director is Rich Bender. More information can be found at TheMat.com