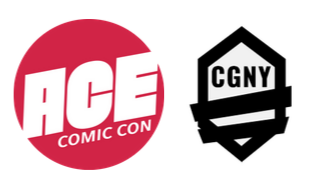 CGNY will bring their vast array of gaming technologies and tournament infrastructure to the ACE Gaming Zone that will host an exciting selection of competitive tournaments throughout the weekend featuring top games such as Super Smash Bros. Ultimate, Mario Kart 8, Marvel vs. Capcom: Infinite and Rocket League. Attendees will also have the opportunity to play Beat Saber using the Oculus Quest for an immersive VR experience. Prizes and raffle items will be available throughout the weekend.

“CGNY has built an incredible reputation as a fun and inclusive environment for gamers to come together and compete,” says Stephen Shamus, ACE Universe President. “At ACE, we are committed to giving fans top-notch experiences and memorable weekends. CGNY is going to give gamers and attendees just that through their wide selection of tournaments and events.”

“CGNY has produced over 100 gaming events for dozens of venues, but we are especially thrilled to be a part of ACE Comic Con Midwest’s amazing roster of guests,” Community Gaming New York Co-founder Chris Kovalik said. “Our goal is to provide a social and inclusive experience where gamers can share their passion for the games they love, together. We look forward to providing ACE Comic Con guests an incredible weekend of gaming tournaments and experiences.”

Stay tuned as ACE Comic Con continues to announce additional activations, future dates, cities, and other information at www.acecomiccon.com, or visit ACE Comic Con on Facebook, Twitter and Instagram. Be sure to follow CGNY for future monthly in-person tournaments and social events on Facebook.

ABOUT ACE UNIVERSE
ACE Universe (www.aceuniverse.com) is a New York-based and globally recognized live experience and media company founded by brothers Gareb Shamus and Stephen  Shamus, who are the world’s most innovative producers of Comic Con events. Stephen has personally produced over 175 Comic Con events, booked thousands of celebrity guests, and played host to millions of happy fans. Gareb has shaped geek and nerd culture for almost 30 years and is the leading pop-culture expert, founder of the largest Comic Con tour in the world, an original pioneer and producer of national Comic Cons, and publisher to multiple award-winning magazines that were distributed and translated in over 75 countries. ACE Universe produces premium events in world-class venues that feature the best of Film, TV, Gaming, Virtual Reality, Collectibles, Comic Books, Original Art, Toys, Action Figures, Graphic Novels, Illustrators, Writers, Creators, and Entertainment Programming.  Fans can view content from previous events on www.youtube.com/ACEUniverseComicCon and engage with us on Facebook, Twitter and Instagram @acecomiccon.

ABOUT COMMUNITY GAMING NEW YORK
Community Gaming brings fans together to share their passion for the games they love. We host monthly gaming events at our local ‘Homebases’ across the US such as coworking spaces, bars, restaurants, and LAN centers. Our goal is to provide a social and inclusive gaming experience for players of all ages and skill levels. Community Gaming has produced over 100 events in dozens of partnered venues for the top video games globally. Learn more about us at: https://www.facebook.com/CommunityGamingNewYork/