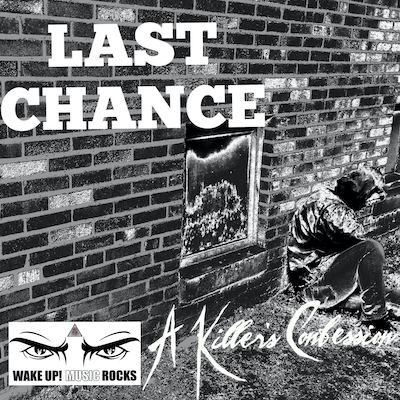 New York, USA, 2020-Apr-08 — /EPR Network/ — Still riding the crest of the wave created by their last single, “Numb”, and an album titled “The Indifference of Good Men”, A Killer’s Confession is back with a new release called “Last Chance”. The group signed a record deal with the Chicago, IL, and Miami, FL, based Wake Up! Music Group last summer and, up until the recently mandated shelter-in-place COVID-19 quarantine, had maintained a steady tour schedule to promote their last record. So perhaps what front man Waylon Reavis and writing partners Sahaj Ticotin and Thomas Church had in mind when they penned this current song is it could just be the cure the doctor ordered for the trying times we’re all enduring.

Reavis, a veteran of the metal music scene and former lead vocalist for the Cleveland, OH, band Mushroomhead, founded this new group in 2016. Since then they’ve been in the sound studio recording, on the road performing, and in front of the cameras shooting music videos pretty much nonstop. Past releases with A Killer’s Confession have even featured Korn’s Brian ‘Head’ Welch on guitar when AKC was still under contract to the EMP Group label. It was after the expiration of that contract that Waylon’s band joined the Wake Up! Music Group.

Since then Waylon Reavis, Pepper Gomez and Julie Reavis have launched a metal/rock side to the label called Wake Up! Music Rocks (https://www.wakeupmusicrocks.com/). “Last Chance” will be the first release for their new label, WUMR, based out of Miami, Chicago, and Cleveland. They are in the process of signing some pretty big bands and will be making announcements soon. Also being released is a “quarantine” music video for “Last Chance”. As no one in A Killer‘s Confession could come together to shoot this video due to COVID-19, they had everyone in the band send videos from their homes. All footage was taken by a cell phone camera. AKC would like to show everyone that we can still accomplish things while being safe and respecting social distancing until this crisis has passed.

A North American radio and press campaign is currently being launched to promote “Last Chance”. Mainstream and Active Rock radio stations will be serviced with the single this week for airplay consideration, as well as various entertainment outlets for coverage in their print and online publications. To find more information about the band you may go to http://www.akconfession.com/ where you can obtain more information about future appearances, events, news and other updates. A Killer’s Confession’s press kit will be provided upon request to all members of the media by contacting the representative listed below.