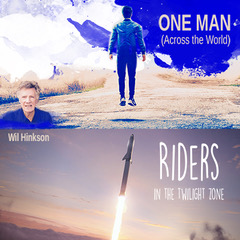 New York, NY, 2020-Oct-20 — /EPR Network/ — Veteran new-80s and chillout rocker Wil Hinkson has surprised fans with two new singles packaged with two B-side tracks. The clutch contains enough listening to call them an EP album. Comprising this collection are “One Man” and “Riders,” followed by “Cross the River” and “Coming Near.” Each has been proudly published as an independent release without the involvement of the corporate music industry on the Oh Keh Muse record label. Recalling pop, adult-contempo legends like Sting, Phil Collins and Toto, this quartet of singles solidifies Wil Hinkson as one of 2020’s most exciting musicians at a time when quality entertainment couldn’t be more valuable.

Wil Hinkson writes, records and performs in beautiful Andorra on the mountain range between Spain and France. This backdrop lends itself to the tone and feel of Hinkson’s new tetralogy, being soft-spoken and beautiful while retaining a razor-sharp air of danger just over the ridge. This comes from his lyric themes, yes, but moreso from his use of minor chords and agitated yet danceable grooves.

“I sometimes think of the following when I work in the studio,” says Hinkson, alluding to his Nietzsche: “The singer answered Zarathustra, saying, ‘I make songs and sing them and I laugh, cry and hum.’”

There’s lots of emotional and sonic texture across these songs, with “Cross the River” having a poppy, vibrant and nostalgic key-tar synth sound, while “Riders” sits somewhere closer to the more pensive work of Genesis or Air Supply. Point being, fans of easy listening and early-80s pop rock alike will find much meat on the bone here.

Notable, too, is that Wil Hinkson’s penchant for parenthetical titles is in full effect with these singles, their full titles hinting at the conflict his music explores: “One Man (Across the World),” “Riders (In the Twilight Zone),” “Cross the River (Crossing the River)” — not the same thing, mind — and “Coming Near (On the Horizon).” Each is a little vignette on the struggles facing his global audience this year, each having a soulful compassion at its root but also surfing on the turmoil as rock ‘n’ roll has always done.

“People sometimes ask me why I make music when professionals say there are 40,000 new songs released every day,” Hinkson says. “If you had songs flowing constantly and you had the ability to record them, you would make music regardless of how many others also do.”

Ultimately, though, he admits it’s about passion:

“Plus I love it, the special moments in the studio where the hair on my arm stands up. Great stuff.”

He’s also spurred on by a confluence of artistic persons.

“It is always impressive to see how people can appear in my musical world in the most curious fashion, and then proceed to add something important that moves the music on its journey. May it continue.”

These new singles come on the heels of his wildly successful duo from early summer, “spirit and Stone” and “Fragile Times.”

In addition to all the digital music platforms, Wil Hinkson’s new tracks are seeing widespread circulation in France, USA, UK, Ireland, Canada, Russia, Germany and more. To this Hinkson has said:

“What a wondrous thing to see the music drifting into so many countries so easily given modern technology; and it will get better because content may very well be king and the mini-formats will become greater in number for more and more artists and for all kinds of genres…bring it on.”

“One Man,” “Riders,” “Cross the River” and “Coming Near” by Wil Hinkson on the Oh Keh Muse label are available from quality digital music stores online worldwide now. Get in early, new-80s fans.

“One Man” by Wil Hinkson at Spotify —