Termite bait systems are one of the most environmentally friendly options to control termites. Termite bait systems provide protection against termites through a three-step process, which includes identifying termite colonies, elimination of termite colonies, and prevention through regular monitoring of any termite activity. Termite bait systems work based on the natural activity of termites. Termites exchange food and other body secretion among themselves within the colony. These systems contain slow-acting chemicals, so when these termites infest the bait, they do not die immediately but pass on the slow-acting chemicals to other termites during food exchange. 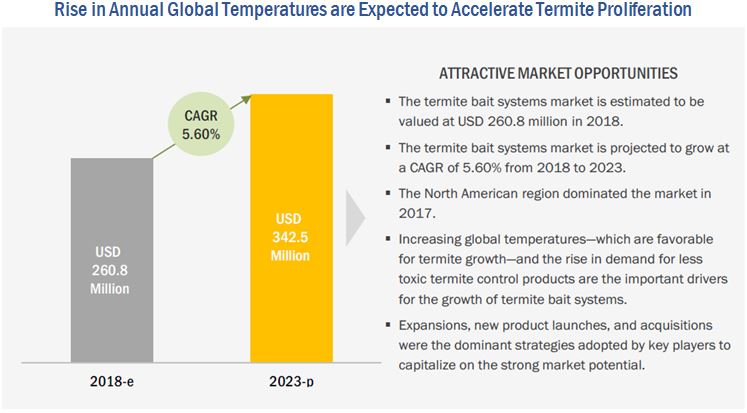 The termite bait systems market is estimated to be valued at USD 260.8 million in 2018 and is projected to reach USD 342.5 million in 2023, at a CAGR of 5.60% in the next 5 years. Key companies in the market include termiticide and attractant manufacturers such as Bayer AG (Germany), Syngenta (Switzerland), BASF SE (Germany), and FMC Corporation (US).

Termites require warm temperatures in the range of 22.9 ᵒC (75 ᵒF) to 35 ᵒC (95 ᵒF) for their growth and survival. They would die if the surrounding temperature is below 25ᵒF or above 100ᵒ F. Hence, termites are predominantly found in subtropical regions of all continents.

According to the National Oceanic and Atmospheric Administration, the global temperature has been rising since 1970, at an average of 0.17ᵒC per decade. The increasing warmth in predominantly temperate regions such as Europe, Asia, and North America would be responsible for the invasion of many insect species, including termites.

Also, the termite bait system market has a growing opportunity in urban residential areas. According to United Nations Data, the urban population of the world has grown rapidly from 746 million in 1950 to over 4 billion in 2016.  As a result, there has been an upsurge in housing, infrastructure, and hospitality sectors. Termites have been able to adapt to the growing urban establishments due to the usage of termiticide products at higher dosage levels without the introspection of a certified pest control service provider. This has led to increased resistance to chemical products. Customers from residential areas have also been proactive enough to take such preventive measures for structural protection of their households. To maintain public health and hygiene, pest management has been sought as an important tool in the urban cities of developed countries. Higher spending capacity of this demography has also been a factor for affording such services.

However, high initial investment and high-priced maintenance contracts from termite control service providers would impact the termite bait systems market. According to the University of Kentucky, termite control service costs vary between about USD 700 to USD 2,500 for initial treatment and further, a service renewal fee, which can sometimes be two to three times higher than liquid treatment, are also added annually. This can affect the usage of termite bait systems among customers.