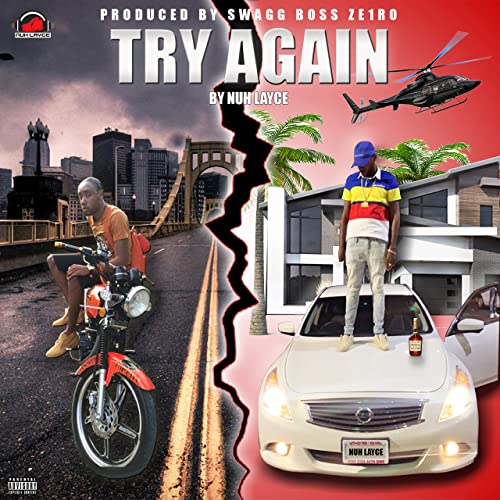 ALSTON, Jamaica, 2021-Jul-21 — /EPR Network/ — The songwriter and producer of reggae and dancehall music known as Nuh Layce has released his latest official single, “Try Again.” It has been proudly published as an independent release without the involvement of the corporate music industry on his own Nuh Layce record label. Original, outspoken, and packed with the genuine island sound, “Try Again” introduces Nuh Layce as the most intriguing dancehall artist in recent memory.

Nuh Layce performs and records original modern dancehall from Top City in Baillieston, Jamaica. He cites as main artistic influences Meek Mills, Timberland, Swiss Beats, Dr. Dre, Ten Eleven, Vybz Kartel, Metro booming, and Drake. Specific to “Try Again,” Layce notes also the work of Marshmallow. With an emphasis on a concrete back beat, ground-floor bass lines and a metric tonne of vocal style, “Try Again” by Nuh Layce has a little something for every fan of the dancehall sound.

Asked to describe the overall theme of “Try Again,” Nuh Layce writes, “With the world slowly coming back to normal, a lot of persons were affected by the pandemic, and I want to motivate people to never give up, to ‘try again.’”

It is this simple mantra which brings the world Layce’s present drop, in fact.

“Along my journey,” he writes, “I have encountered a lot of failures, and I never gave up. I always kept trying. I am not exactly where I want to be, however, I have come a far way.”

The following is taken from the artist’s current official bio:

Hubert Nickel Nembhard AKA (Nuh Layce) is a Jamaican musical artist, producer and songwriter. Nembhard was born in the community of Baillieston, Clarendon. He is the son of Beverly brown and Lloyd Nembhard, the second-youngest of five siblings.

Nembhards musical journey began during his time in Spalding High School after the passing of his father. Music became an escape for his trauma and also became his life force. Nembhard has always been an entertainer. Throughout high school, English Literature and drama was something he excelled at and spent most of his time performing songs and skits for friends during breaks. This paved the way for his prolific lyrical content and performance skills showcased in his music.

In 2014 Nembhard moved to Manchester, Jamaica to officially pursue a career in music and began creating his catalogue with the release of his first unofficial single “Life Never Easy” followed by “One Man Against the World” which he is currently producing officially under his own record label. Then in 2016 Nembhard moved to the parish of St. Ann where he released his song “Nuh Layce.” It was unofficial, but became a hit, and also a brand which Nembhard now has the copyrights to. In 2018, he released his singles “Pree Mi Life,” “Bunna Man,” and “Hustle Everyday,” their content highlighting his versatility and creativity.

Currently Nembhard is promoting his brand-new single, “Try Again,” produced by Swagg Boss Ze1ro, which has been creating a buzz on social media posts and getting numerous clicks. He believes this is the song that will finally get him a permanent spot in the music industry.