San Francisco, CA, 2018-Jan-29 — /EPR Network/ — The global craft beer market is expected to reach USD 502.9 billion by 2025, according to a new report by Grand View Research, Inc. The market is expected to witness substantial growth over the forecast period on account of the rising demand for low alcohol by volume (ABV) and flavored beer.

The government in countries including Australia, New Zealand, Belgium, Mexico, China, and the UK are promoting the production of craft beer and incorporation of new breweries on account of the positive contribution of the industry towards economic development and employment generation coupled with the willingness of the consumer to pay extra for better tasting brews.

Furthermore, the number of brewers in the global market is growing significantly on account of the rising demand for the product. As a result, the demand for grains such as barley, wheat, yeast, sugar, and hops is increasing substantially. However, the alternative applications of the raw materials are expected to lower the bargaining power of the brewers.

The demand for the pale ale, IPA, and amber ale is growing as these three craft products are widely preferred by the consumers owing to the balanced composition of the raw materials in the product including malt, hops, water, and yeast. 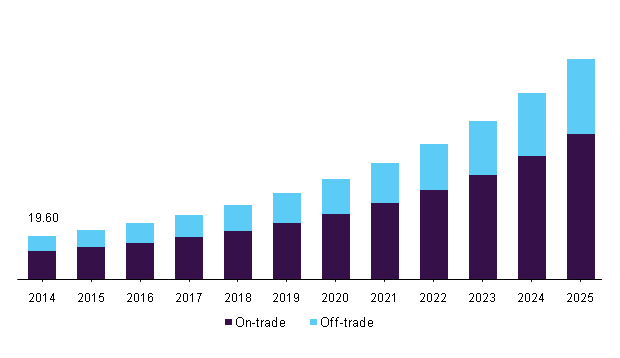 Grand View Research has segmented the craft beer market on the basis of distribution and region:

Grand View Research, Inc. is a U.S. based market research and consulting company, registered in the State of California and headquartered in San Francisco. The company provides syndicated research reports, customized research reports, and consulting services. To help clients make informed business decisions, we offer market intelligence studies ensuring relevant and fact-based research across a range of industries, from technology to chemicals, materials and healthcare.