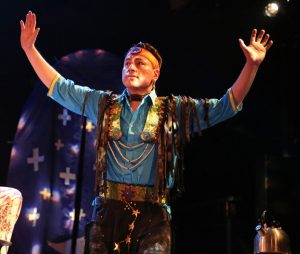 Sheldon Raymore in FEAR OF OATMEAL. Photo by Walesca Ambroise.

Never a disappointment, writer and director Muriel Miguel delivers all of the richness, laughter, and masterful story telling you would expect from a Spiderwoman Theater production. This time, with a secret weapon – Cheyenne River Sioux choreographer, dancer, and actor Sheldon Raymore.

Set in an old family home in Brooklyn, “Fear of Oatmeal” is the story of an old Native woman, Nelly and of her house. She is surrounded by the detritus of the generations who came before her and by her memories. “Fear of Oatmeal” recalls the Native community that lived in post-Depression Brooklyn. They moved freely from home to home, visiting, sharing food and telling stories (spiderwomantheater.org, “Fear Of Oatmeal”).

An audience favorite in New York’s theater scene, Raymore plays a mischievous and comical warrior spirit that has come to keep Nelly company.

“I really feel like I’ve come into my own as an actor in this show,” says Raymore.

One must agree as Raymore’s role is incredibly physically demanding. In addition to the show’s none stop comedic dialogue and pace, Raymore also dances, and even rollerblades on stage during the show. His execution of the show’s physical comedy was indeed worthy of the opening night standing ovation. A skill Raymore now attributes to none other than the inspiration of Spiderwoman Theater.

“As a Native youth of 14 years old, I had first seen the Spiderwoman Theater Group perform in Portland, Oregon.”

“Here were these 3 amazing indigenous women performing in front of me, and all I could think about was what incredible spirit and energy they put into their performance. It was the first time I had ever seen native theater.”

Playing now through June 24th at the Theater for the New City, NYC.

Tickets on sale now at www.spiderwomantheater.org 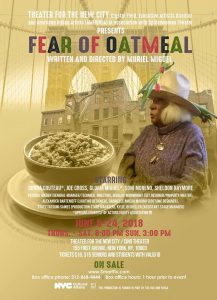 Tickets on sale now at https://www.spiderwomantheater.org