NEWPORT BEACH, USA, 2018-Aug-07 — /EPR Network/ — On May 10, MusiCares® hosted their annual Concert for Recovery, which raises funds and awareness around MusiCares’ mission of supporting members of the music community who are struggling with addiction issues.

Jovenville has a longstanding partnership with MusiCares to develop the creative collateral for each year’s unique event. Since the 2018 concert honored Mike McCready, a founding member of the seminal 1990s band Pearl Jam, the Jovenville team built their design inspiration around a theme they called “sophisticated grunge.”

Design elements included the asymmetrical layouts and overlapping elements that characterized many of the DIY rock posters of the era, but updated for contemporary appeal. To build awareness and promote ticket sales for the event, the creative agency produced an email announcement and digital ads, as well as a tribute journal that was available on the day of the concert.

“Since we have been working with MusiCares on this event for so long, we always feel the need to push the envelope every year,” said Joven Orozco, creative director behind the project. “I think our team really outdid themselves for the 2018 event, and I am so proud we can play a role in supporting this important cause.”

The 2018 Concert for Recovery included performances from McCready, as well as music industry luminaries Slash and Duff McKagan of the band Guns N’ Roses and the Red Hot Chili Peppers’ Chad Smith. 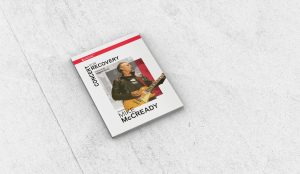 For a good time or to learn more about Jovenville and see the agency’s award-winning work, feel free to visit jovenville.com, contact Nikita Russell at nikita@jovenville.com or call 949-723-1898.