A 3D Bus and Ship Simulator Game that takes you through various countries in different modes of transport. So begin your International Road Trip as well as Ocean Sailing adventure now. This game provides a realistic feel of driving a Bus, Jeep, Truck or even Sailing a Ship and a Boat across countries like India, Bangladesh, France, and England. You feel the hero appearance from the very start of the game.

In this game, there are five levels and at the end of game Param(Arjun) reach England and meet his wife Jasmeet(Parineeti). The Namaste England game has special speed control buttons on the screen, which can be experienced from start. And you will enjoy the whole journey.

Finally, we wish our readers to enjoy the Namaste England game. Let us know your feedback. We would like to continue the improvements and add more wonderful levels to this game. Not just keeping it restricted to the promotion but in order to provide real entertainment to our players.
About Sony Entertainment.

Sony Entertainment Television is one of the leading Hindi General Entertainment channels in India. Since its launch in October 1995, SET has created a unique space, in television programming, with movie premieres, fiction & non–fiction shows.
Aaryavarta Technologies develops engaging games and entertaining applications amongst a variety of solutions which we provide to both Content Partners & Device Manufacturers. 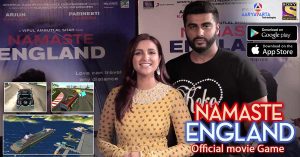