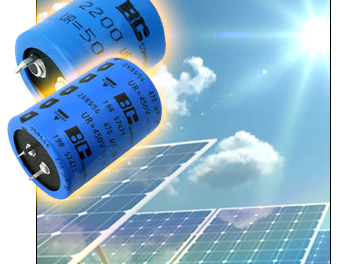 The 500V PGP-ST has been optimized for DC-Linking in power conversion electronics rated at 20kW and above and are available with 8mm terminals. Cases are cylindrical and aluminum insulated with a blue sleeve and pressure relief in their sealing disc. They are also available in seven case sizes ranging from 50mm by 80mm to 90mm by 220mm.

New Yorker Electronics is a franchise distributor for Vishay BC Components and carries the full line of 2017 Vishay Super 12 Featured Products as well as its full line of discrete semiconductors (diodes, MOSFETs and infrared optoelectronics) and passive electronic components (resistors, inductors and capacitors).

New Yorker Electronics is a certified franchised distributor of electronic components, well known for its full product lines, large inventories and competitive pricing since 1948. New Yorker Electronics is an AS9120 and ISO 9001:2015 certified source of capacitors, resistors, semi-conductors, connectors, filters, inductors and more, and operates entirely at heightened military and aerospace performance levels. It also functions in strict accordance with AS5553 and AS6496 standards — verifying that it has implemented industry standards into everyday practices to thwart the proliferation of counterfeit parts. It is a member of ECIA (Electronics Component Industry Association) and of ERAI (Electronic Resellers Association International).