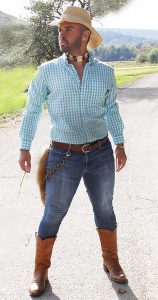 NEW YORK, 2019-Jan-29 — /EPR Network/ — Given the continued battle against red face and cultural appropriation in the New York City Theater community, a First Nations play among the Broadway shows on 42nd street is long over due. That very play is just what Ojibwa/Oneida playwright and multidisciplinary artists Ty Defoe is giving us with “Ajijaak On Turtle Island.” Written by Ty Defoe with lyrics by Ty Defoe and Dawn Avery, music by Dawn Avery & Larry Mitchell, Kevin Tarrant and Ty Defoe, and based on original storyboards written and drawn by Heather Henson (of the Jim Henson legacy). “Ajijaak On Turtle Island” features exquisite puppets made by the Jim Henson Company and Ibex puppetry, projection design by Kate Freer, scenic design by Christopher Swader and Justin Swader, and is a fantasy spectacular for both youth and adults of all ages!

Ajijaak is a young crane who meets Native American ancestors and community members along her migration route. Through them and their traditional songs, dances, and stories, she is taught many virtues to help restore balance to the world, and help save it from its own greed and devastating consumption. Resistance and “never giving up” is taught to Ajijaak by “Walks In Two Worlds,” played by 2018 Native American Music Award nominee, Tony Enos (Cherokee).
“It’s a dream come true to know that Native youth will come to see our show, and see themselves and their life ways represented on stage,” says Enos.
Having released his third studio album “No Place Like Home,” last June 2018, Enos is best known for his musical success as a pop artist and entertainer, but he has been a member of the NYC theater community for years.
Celebrating over a decade in the music industry, the pop singer/songwriter/producer brought theater goers to tears last October with a tour de force performance in Jen Marlowe’s emotional play “There Is A Field” (Donkeysaddle Productions). After years of off Broadway work, Enos finally feels comfortable adding the word “actor” to his resume.
“I think acting is different things to different people. To me it’s defending the character and fighting for what they need,” says Enos. 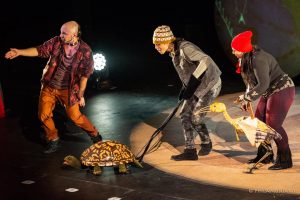 In “Ajijaak On Turtle Island,” Enos teaches the young and discouraged Crane through song. “Umbay Oma” is a hop-hop inspired rap song that speaks to the 550 plus years that Indigenous people have survived and overcome, while “We Are Dancing,” is beautiful ballad that celebrates the resistance of Native people. Both songs are penned by Ty Defoe and produced by the show’s musical producer and composer Dawn Avery (Mohawk) and Larry Mitchell. Enos performs both to a tearful and captive audience every night.
“By the end of “We Are Dancing” you can literally feel the lump in the audience’s throat,” says fellow cast member Sheldon Raymore (Lakota).
He continued “the song is the arc of the show and celebrates our resistance as contemporary Native people. Tony has the ability to channel that in such an electrifying way every night.”
While a lot of performers may struggle to keep a level head while making the transition to 42nd street, Enos is set on 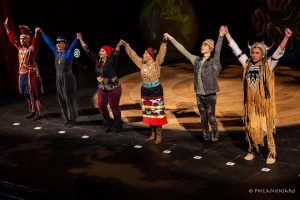 making the transition in a good way.
Enos reflected, “I carry that poor kid from the Whitman housing projects in Philadelphia with me every day. This
opportunity is more than he ever could have hoped for or dreamed of. I never want to take any of it for granted.”
“My only hope is to services the work, and make sure people – especially our youth – leave with more than they came in with.”
Don’t miss the “Ajijaak On Turtle Island” March 1st – 10th at the New Victory Theater on Broadway and 42nd Street, New York City! Tickets on sale now at www.ajijaak.com