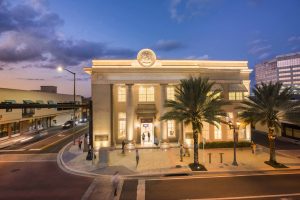 Clearwater, FL, USA, 2020-Oct-14 — /EPR Network/ — The Scientology Information Center announces its next video highlighting life and friendship, inviting the community to drop by during its extended celebration of the International Day of Friendship. The Center is in the heart of downtown Clearwater, newly branded “The District” where outdoor restaurant seating and live music is offered.

During the final weeks of the month of October, the Information Center continues to highlight videos that depict friendship and inclusion regardless of differences.

The video chosen for this week is a charming interview by a woman named Gloria, originally from Port Orchard, Washington who was a neighbor of L. Ron Hubbard, founder of Scientology and his parents. She tells of adventures of tagging along with Mr. Hubbard and his long term friend, Clark Gable, on their breaks from screen-writing/editing and learning that no matter who people are – they matter.

“Personally, this is one of my favorite videos,” said Amber Skjelset, Manager of the Scientology Information Center. “It’s a video of a woman who as youngster, a girl and a minority, she found acceptance. In the late 1930s, this wasn’t always the case. It reflects what Mr. Hubbard has often said about treating everyone with respect, ‘People have value and are important.’”

“Ron told me, ‘You learn something from everyone you meet. Everyone has a different quality. If you talk to them long enough, you’ll learn something that you can take into your life that can help you…” said Gloria. “He was like a big brother to me, a wonderful big brother.”

For those visitors also curious about the Scientology religion, Churches of Scientology or its Founder,  they are welcome to take a self-guided tour through the information panels in the Center’s grand lobby in the historic building.

No appointment is necessary. Masks are required indoors in accordance with the Pinellas County mandate, and are provided complimentary along with travel-sized bottles of hand sanitizer.

For more information about the Scientology Information Center please contact Ms. Amber Skjelset at 727-467-6966 or email amber@cos.flag.org or visit during its hours of operation: Sunday-Friday 10am-7pm and Saturday 1-7pm.

The Scientology Information Center, located in the century-old Clearwater Building in downtown Clearwater, opened on July 11, 2015, and currently houses a gallery of audiovisual displays with some 400 videos. The Center is open to all and provides a self-guided tour showing basic Scientology beliefs, Churches around the world, ongoing social programs and the life of L. Ron Hubbard, Scientology’s founder. The Center offers tours to the broad public; and opens up the use of its conference room to social, civic and non-profit groups.