The changing consumer preferences have showcased a growing consumer shift toward adapting to a more nutritional diet centered towards a more sustainable lifestyle and lower dependency on animal proteins. A considerable percentage of the millennial population in Western countries has been observed regarding their changing food habits as consumers move from conventional animal-based products to organic and plant-based food products as an ideal food solution. 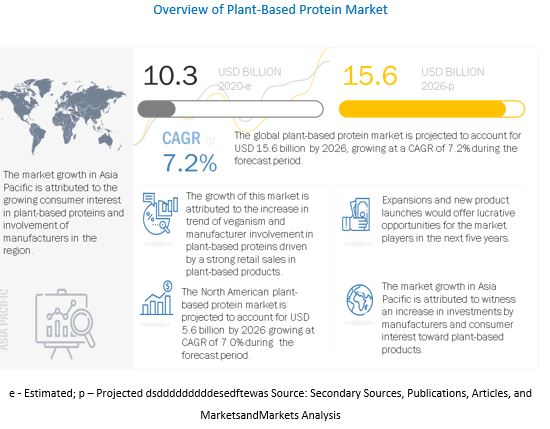 Plant-based food beverages have functional health benefits and consist of essential minerals; however, in several cases, the consumption of select sources, such as soy and wheat, has been identified as allergens resulting in cautious consumer acceptance. Soybeans have s strong nutrient content profile including, vitamins, minerals, and proteins; however, antinutritional components present in soy could cause allergies. According to the Cleveland Clinic, soy is one of the “Big Eight” allergens, along with cow’s milk, eggs, peanuts, tree nuts, wheat, fish, and shellfish, responsible for 90% of all food allergies. A soy allergy occurs when the human immune system mistakes the harmless proteins found in soy as harmful and produces antibodies to combat them.

Opportunities: Rise in demand for food beverages with organic Ingredients

The organic plant-based protein market has the potential to change the business landscape in the overall plant protein ingredients market. According to the Research Institute of Organic Agriculture (FiBL), “a total of 71.5 million hectares were organically managed at the end of 2018, representing a growth of 2.9 percent or 2 million hectares compared to 2017, the largest growth ever recorded.” In 2018, 2.8 million organic producers were reported globally, and India continues to be dominant with the highest number of producers. Growth of the organic food products market is also expected to boost the growth of the organic plant-based protein ingredients market.

Challenges: Concerns over source quality in food and beverage products due to the use of genetically modified crops

Soy, wheat, and pea are among the prominent sources used in the processing and production of plant-based proteins and are produced primarily in countries such as Brazil, the US, Canada, China, and India. These countries also represent a key portion of the demand for plant-based food beverages among consumers. However, to meet the growing demand for various plant-based protein sources, farmers often grow genetically modified (GM) crops, which is often seen unfavorably by consumers.

North America is projected to account for the largest share in the global plant-based protein market during the forecast period.

The North American market accounted for the largest share in 2020 due to the presence of some of the leading manufacturers such as Cargill (US), ADM (US), DuPont (US), and Puris (US).  The North American region has been a key driver for the growth of the plant-based protein market owing to the investments in product manufacturers as well as processing units. The region is a key producer of different sources, including soy, wheat, and pea, with the combined output from the region dominating the global export market. The growing trend of veganism in the region also continues to propel plant-based protein products into the mainstream. The rising incidences of obesity, cardiovascular diseases, and diabetes among the American population has also prompted consumers to adopt vegan diets.

By application, the food segment is estimated to account for the largest market share in 2020 in the plant-based protein market.

The food industry of the plant-based protein market is at the forefront of the plant-based revolution. Changing consumer preferences driven by awareness toward meat sourcing practices, its ecological impact, and animal-borne diseases have led to more consumers opting out of meat consumption. The resulting change has led to consumer demand shifting from conventional animal-based proteins to plant-based alternatives. The growing vegan trend has led to an upsurge in manufacturer presence in the sector.