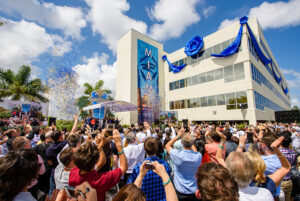 “Miami is a true ‘melting pot’ and the program, Destination Scientology: Miami uniquely captures the diversity of cultures,” said Amber Skjelset, Manager of the Scientology Information Center. “The episode even visits the Calle Ocho (Eighth Street) Walk of Fame which pays tribute to Cuban & Latin cultural figures, like salsa legend Celia Cruz and makes a brief stop at a traditional game of dominos in the park. It really makes you feel as if you traveled there yourself.”

“The Miami Church of Scientology was established in Miami in 1957,” added Skjelset “And in 2017, they moved to their expanded and ideal quarters enabling them to increase their community outreach and social betterment activities.”

“Miami is like home to me,” said Maria, a staff member at the Church of Scientology Miami. Maria is originally from Peru and is highlighted in the program. “It’s a place that I want to continue to live in and help for my children and my grandchildren. It’s a beautiful, city full of life and Scientology embraces that.”

One guest, Carolena, stated after the screening, “I have been to Miami so many times and it truly is a community that embraces people from all over the world! The next time I visit Miami I’d like to visit the Church there. The one thing I noticed about the Scientologists I’ve met is that they think outside the box and they help you do the same.”

The Scientology Network on DirecTV, channel 320 has as one of its many series, the “Destination Scientology” programs. These 30 minute programs highlight some of the major Churches of Scientology around the world showing how they work, in collaboration with their communities, to make a better, safer environment. It also provides an inside look at what makes their cities or countries unique.

The Scientology Information Center’s hours of operation are Sunday-Friday 10:30am-1pm and 2-7pm and Saturday 2-7pm. No appointment is needed, please call 727-467-6966 for more information.

The Scientology Network programming is available locally on MOR TV and CW 44, or you can tune in on DirecTV channel 320, or streaming at www.scientology.tv or through apps at appleTV, fireTV and ROKU.

The Scientology Information Center, located in the century-old Clearwater Building in downtown Clearwater, opened on July 11, 2015, and currently houses a gallery of audiovisual displays with some 400 videos. The Center is open to all and provides a self-guided tour showing basic Scientology beliefs, Churches around the world, ongoing social programs and the life of L. Ron Hubbard, Scientology’s founder. The Center offers tours to the broad public; holds concerts, theatrical performances and receptions for the community; and opens up the use of its conference room to social, civic and non-profit groups.

Photo caption: Including footage of its 2017 grand opening, “Destination Scientology: Miami” treats viewers to a dynamic overview of the Church of Scientology of Miami and its surroundings. On Friday, August 6th the Scientology Information Center hosted a replay of the program.