The Hybrid Seeds Market is estimated to be valued at USD 25.2 billion in 2021 and is expected to reach a value of USD 34.9 billion by 2026, growing at a CAGR of 6.7% during the forecast period. Factors such as increase in seed replacement rate, availability of hybrid seeds, and increasing demand for fruits and vegetables are the main drivers of the hybrid seeds market.

By crop type, the cereals & grains is projected to dominate the hybrid seeds market during the forecast period.

The cereals & grains segment is projected to hold the largest seed market share during the forecast period Owing to factors such as the widespread use of grains as a staple food in many Asian and Southeast Asian countries. In the past few years, countries such as China have emerged as major exporters of grains to meet the requirement of neighboring economies. Crops such as corn are widely utilized in both the food and feed industries. With the rising market for biofuels, crops such as sorghum are also being produced on a large scale.

By key crop, corn segment is projected to dominate the hybrid seeds market during the forecast period.

An increase in the usage of corn for feed and industrial applications are some of the key factors leading to its demand and higher usage among corn growers to gain profits. The commercial traits mostly used to produce corn hybrid seeds are insect resistance and herbicide tolerance. 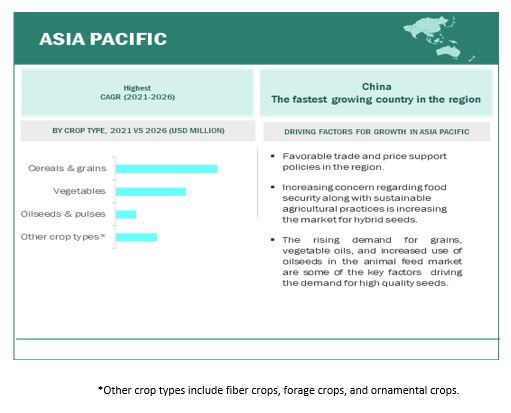 Asia Pacific to be the fastest-growing market during the forecast period.