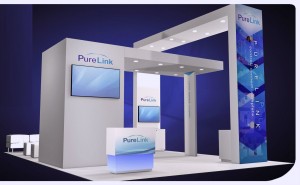 Specific PureLink products being shown include their comprehensive PureMedia Matrix Switcher series, a scalable, configurable HD ecosystem available in nine chassis sizes and featuring touch-screen controls. Also being shown, from the HDTools line, are the new HTX Series HDMI to HDBaseT matrix switchers, and UX Series HDMI matrix switchers, the world’s first matrix switchers to support both HDMI 2.0b and HDCP 2.2. Finally, the company will debut new solutions from their PureStream line, including the MPX Digital Signage Content Management Software/MPX-100 Media Player bundle, and the VIP Series of Video-over-IP solutions.

Founded in 2002, PureLink developed not only the world’s first digital matrix switcher, but also the first HDCP-compliant matrix switcher and the first modular cross-platform digital matrix switcher. PureLink is inviting all InfoComm16 visitors to join its interactive training sessions, presented daily at the show, to learn more about the current state of the Ultra HD/4K video industry as well as the latest advancements in video-over-IP and digital signage systems.

“In addition to the product demos and training sessions in Vegas, PureLink invites attendees to wind down and have a drink on us during our Happy Hour celebration on Wednesday and Thursday at 3:30PM,” said Howard Schilling, PureLink’s Director of Sales. PureLink is also providing Free Exhibits Passes for those still in need.

For a schedule of the training sessions being offered at PureLink’s booth at InfoComm, click here.