New York City, USA, 2018-Sep-17 — /EPR Network/ —  Just shortly after 6pm on Monday September 10th, 2018, the Native American Music Association released its official list of 2018 Native American Music Awards Nominees. Right there under category 26, was an acknowledgment that has been centuries in the making. “Two Spirit,” a song written and recorded by Cherokee pop artist Tony Enos for the Two Spirit movement was among the six nominations for 2018 “Best Dance Song” Category. 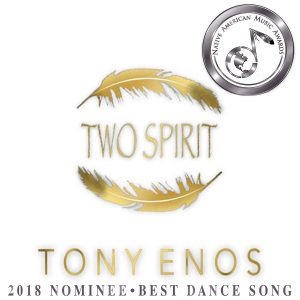 The “Two Spirit” single and music video was released by Enos on October 11th, 2015 for National Coming Out Day. It has gone on to become an anthem for the Two Spirit movement, and the #1 song of the singer/song writer/producer’s career spanning more than a decade. The song has never been nominated for an award until this year, after recently charting on the Indigenous Music Charts in Canada for several weeks.

“There had never been a song released for the Two Spirit movement, or our people. We didn’t have anything, pop or otherwise,” says multidisciplinary Lakota artist Sheldon Raymore. A member of the Cheyenne River Sioux Tribe, and an Executive Producer on the “Two Spirit” single.
The song’s message speaks directly to the heart of some of the most devastating affects of colonization, western religion, and intergenerational trauma experienced by Native American/First Nations/Indigenous Two Spirit people. “Two-Spirit,” a pan-Indian term coined in 1990 at a First Nations LGBTQ gathering in Winnipeg, is meant to unite Indigenous LGBTQ people from all Nations. It’s given birth to a reclamation of the tribal role that existed in many Native American Nations for their LGBTQ people. 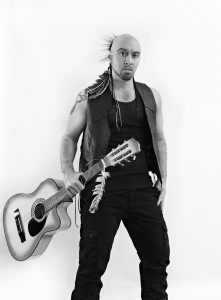 “It was Sheldon’s idea to do a song for the movement, and we had several conversations about what the message of the song should be,” says Enos.
He continued, “Finally Sheldon said ‘it should celebrate something!’ That’s when the lightbulb went off, and I wrote the whole thing in about 10 minutes!”
“This nomination and recognition belongs to the Two Spirit community! It’s OUR nomination, and if we win it will be OUR win,” said Enos.
The song’s lyrics and uplifting message are simple, “Celebrate Me, Celebrate you!” Here’s hoping that the Two Spirit community celebrates a victory on Friday October 12th, 2018 at the 18th Annual Native American Music Awards!
Voting is officially open to the public!
CLICK HERE TO VOTE NOW!
https://www.surveymonkey.com/r/VOTENATIVENAMA18 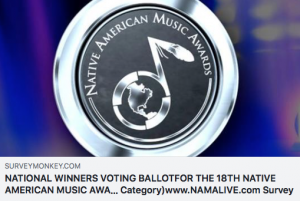