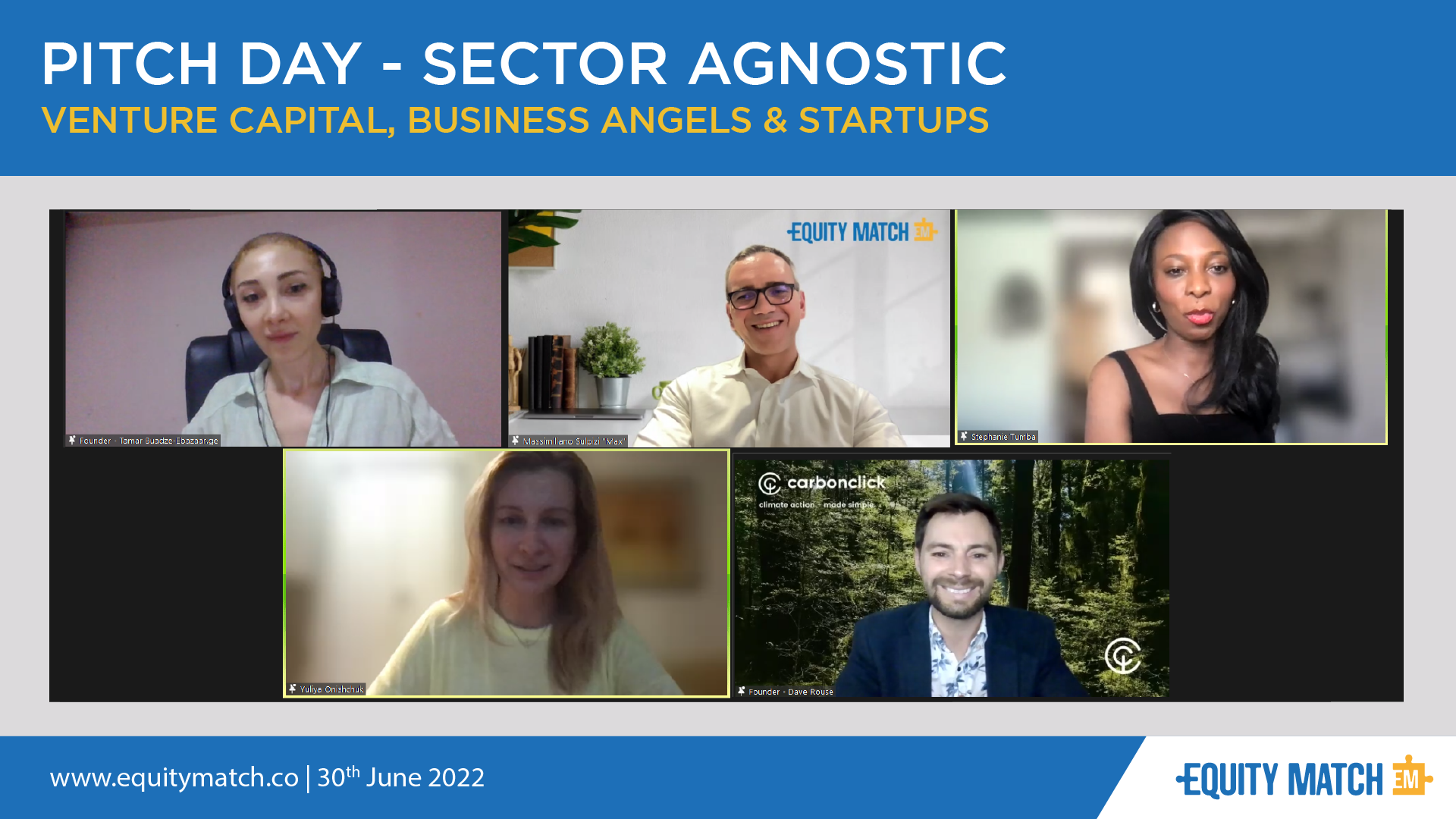 London, United Kingdom, 2022-Jul-14 — /EPR Network/ — The fourth webinar in a series leading up to the fifth private pitching session on an intriguing topic of “Sector Agnostic” was successfully hosted by EquityMatch.co, a smart investing platform in the UK. The occasion was broadcast live on Zoom and was open to the public.

EquityMatch.co-hosted a global webinar on “Startups that enlighten the era of sector agnosticism” on June 30th, 2022, from 5 p.m. to 7 p.m. GMT. The webinar was an opportunity for entrepreneurs that EquityMatch.co had specifically chosen to pitch to angel and venture capitalist investors. Nine founders and three well-known investors from around the world spoke about important components of their startups during the discussion. Massimiliano (Max) Sulpizi, the creator of “EquityMatch.co” and Managing Partner of HSMI-Corporate Advisory, served as the event’s host. He has also held positions as a CEO, a merchant banker, a venture capitalist, and a business owner. He has provided businesses with advice on transactions totaling more than €100 million and fundraising efforts of €50 million in the infrastructure, apparel, real estate, and technology sectors.

The session kicked off with Nishat Hashem who is the CEO and Co-Founder of Apojo Technologies. She is an individual who received her Bachelor of Information Systems and Bachelor of Commerce double degree at Melbourne University. Nishat is now concentrating on improving intelligent automation in businesses through change management. She employs a comprehensive strategy for intelligent automation that considers the human element to prevent resistance from actual workers. During the session, she spoke about how Apojo is a global creative ecosystem that connects screenwriters and production studios directly. She stated, “We are the creative connector, a virtual platform that delivers on next-generation networking, collaboration and digital marketplace for creatives to make their content work.”

Angela Griggio and Luca Eugenio were also part of the session representing B Datagray. Angela is the CEO and Co-Founder while Luca is the COO and Co-founder of B Datagray. They discussed how the cloud computing sector is expanding daily but is also plagued by issues including inefficiency, lack of transparency, and privacy concerns. Moreover, they spoke about how B Datagray helps in solving these issues by upgrading the blockchain revolution. Angela stated, “Our solution is Datagen Ecosystem which is a new, flexible and decentralized network that can provide cloud computing.” She went on to explain how they are creating a complex blockchain ecosystem offering different services and products, where each one is helping others to solve scale problems.

The discussion also included Dave Rouse who is the CEO of Carbonclick, which is a company based in New Zealand. Dave is an award-winning entrepreneur and philanthropist who is a high achiever and relentlessly focused entrepreneur. He stated how the company is focused on helping to reduce the climate impact across businesses. He also explained how they focus on connecting millions of individuals to projects to reduce pollution and restore nature. “Sustainability and innovations are present in our DNA, where our FinTech company is dedicated to climate change,” Mr. Dave added, “We are looking at helping the world to adjust while helping restore and reconnect with nature and ultimately helping to restore the planet.”

The fifth speaker of the discussion was Saviour Anslem who spoke about how eDUCARA is helping the educational sector in Africa. Anslem is the CEO of eDUCARA, which aims at helping all the head schools in Africa by managing and operating in one place. He spoke about how many schools have issues in Africa. He stated, “There are many schools that have unrepetitive operations that are not automated. We understand that this wave of innovative technology is across different sectors in Africa but, when it comes to the educational sector it is lagging behind.” He further explained how eDUCARA is helping these schools by bringing in their solution.

Tamar Buadze was also part of the discussion and enlightened the session by speaking of the ways ebazaar.ge has been implemented to help solve issues faced by farmers. Tamar is the CEO and Co-Founder at ebazaar.ge. She is an experienced E-Commerce Executive and a Business Consultant with strong interpersonal skills. During the event, she outlined the major issue that is being solved by the company. She stated, “The problem is that 90% of the regional farmers and households in Georgia have zero interaction with urban marketplaces and final consumers who buy their products.” She also went on to explain how ebazaar.ge is the first online platform in Georgia that aims at changing the way farmers and regional households present and sell their products.

Christophe Legrand, CEO at Local Ocean Tech was also part of the discussion. He spoke about how the startup is related to indoor shrimp farming technology and is aligning with the UN’s Sustainable Development Goals (SDGs). Christophe is an individual with 20+ years of experience in international sales and business management. Additionally, he has more than 15 years of experience in digital marketing and innovations. During the session, he explained how the startup is aiming at bringing an indoor, sustainable, and cost-efficient production method. “Europe goes through four hundred thousand tons of shrimps per year and all of it is imported,” he said, “Our system produces 170 kg of shrimps per month. Furthermore, the system is scalable because the product can be shifted very easily.”

Andrea Silva, CEO at Moppy was the eighth speaker of the session. He is a Google employee with a strong experience in technology. He has a proven track record of creating new businesses, leading high-performing teams, and expanding into new markets. Furthermore, Andrea is highly skilled in partnerships and business development in the technology sector. He spoke about how Moppy is a global platform that builds long-term sustainable jobs for workers in the cleaning industry. “We have identified some non-addressed issues. Mainly, cleaning recruiting happens largely offline. Thus, we are trying to make sure that the cleaners will have a simple tool to present themselves and their skills to potential employers and we will empower them to get a sponsor to their recommended acquaintances,” said Mr. Andrea.

The last speaker of the session was Amos Mushumbusi who represented Twenzao. Amos is the founder of Twenzao, a carpooling application that connects private car owners and passengers traveling in the same direction. Additionally, he is a software engineer who is enthusiastic about entrepreneurship and mobility. He explained how the startup is aimed at building Africa’s leading carpooling platform. “The problem we try to solve can be split into two categories: the car owner’s concerns and the rider’s concerns. Car owners may be concerned about the expense of the fuel and encounter cunning passengers. While on the rider’s side, they may be concerned about safety, travel expense, and comfort,” said Mr. Amos. He also went on to explain how they provide a very simple solution by allowing both parties to save money while giving safety prominence.

The webinar was a complete success, providing insightful knowledge about these startups that operate across industries. EquityMatch.co has booked comparable occasions for 2022. Additionally, participants will learn how to register for a free EquityMatch.co-membership, which provides them with marketing and promotion choices as well as direct access to investors. Visit www.equitymatch.co and EquityMatch.co’s social media pages on Facebook, Twitter, and LinkedIn to get involved and find out more about upcoming webinars and events.